How you can progress faster to intermediate level surfing

As you’re attempting to pass through the novice phase of surfing, two things that will ensure you progress well are firstly going surfing in the right kind of conditions for your level, and secondly, ensuring that you develop a tidy pop-up technique – one that will work on the steeper unbroken waves and put you in a well balanced stance that allows easy speed generation and turning.

The first thing can be dealt with quite easily and quickly as understanding wave types and forecasts is simply an intellectual activity, and getting a good enough understanding isn’t rocket science. I wrote an article on it here which you can check out if needed.

But the pop up or take-off is a lot more complicated as we are dealing with a complex physical skill that requires good hip mobility, but not only that, it has to be done at the right time and place on a wave, and that means you have to be 100% focussed on actually catching the wave in the first place.

You don’t have the luxury of thinking about your pop up technique as you do it. It’s not static like a yoga pose for example, you can’t take your time and cue yourself through it as you do it.

I’ve seen some people stall along the way and others progress really fast.

So what is it that the quicker learners are doing?

The concept of chunking can be used to help surfers integrate the entire motor pattern of the pop up. For example, combining all the necessary elements into three (or more) distinct sub-units such as: wave entry, push board down /lift hips up , and foot placement allows surfers to focus on fewer well-learned sub-units to be incorporated into a complex, effective pop up.

Because there are so many aspects to the pop up, I’ve found that chunking is a good way to simplify it for late starters to surfing. You can focus on getting the first phase right then pause and do the second phase, then pause again and do the third. Or you can break it up further if needed. You can do all this slowly, then once the chunks become more familiar you can speed it up and start to put the chunks together as one movement.

With any sport we can find good role models for learning each of these chunks simply by watching professionals performing the skill in slow motion. For more than 10 years I’ve been growing a library of clips that show the pop-up from all angles, and one thing is for sure, all the pros perform these chunks the exact same way.

If you sync one pro against another, as long as the wave is reasonably similar and the filming angle is similar, you will see that the 2 individual surfers will look almost like a carbon copy of each other.

So we can pull from those clips some good ‘model chunks’ that can then be copied by a surfer as they improve each sub-unit of a complex skill like the pop up.

This is essentially what I do with clients, I first identify the chunks that they are doing well, this builds confidence, e.g. “your pop up is 70% the same as Felipe Toledos”. Then we hone in on the other 30% and compare that chunk to the pro. Then we see what needs to be improved.

This approach is safer than trawling YouTube for advice. I know it’s tempting but you could have a pop up that is 80% correct, but instead of identifying and fixing the 20%, you might come across something that is irrelevant to your specific needs, and you then re-learn a whole new method that isn’t actually bio-mechanically sound or based on what the pros are doing.

Next thing your pop up is only 50% sound and you are mentally confused on what to do next. Perhaps go back to YouTube and try another method?

My golden rule is if it doesn’t look right, it isn’t something you want to copy. Does that person in the tutorial end up in a goofy stance with rigid arms? Yes – then don’t copy it. Keep it simple and just copy the pros movements.

Once clear on the technique, the person can then go away and practice that chunk until it becomes 2nd nature. And this has to be done on land, preferably on an old surfboard or softtop, with a downward slope to simulate the wave’s shape. If you wait until you’re in the water you will get in your head too much, mistime your waves and generally get stressed out.

So this is where the 2nd idea, consistency comes in.

Over the years I’ve been surprised by client’s improvements on quite a few occasions. One guy was struggling to takeoff on unbroken waves every single time. We identified the issues and he went away to practice. Next time I saw him was only a few months later and he was a whole new surfer.

I was quite surprised by the transformation so I asked him what he did. “10 pop ups per day every day”. Now 10 isn’t many and would only take a couple of minutes, but it’s like playing guitar, they say 5 minutes a day is better than a big 1 hour session only once per week.

And I’ve seen this numerous times with other people, consistency pays off. Here are a couple of before and after shots of one guy who put some consistent practice in to change where he looked on pop up and also the technique he used to place his back foot, resulting in more balanced takeoffs and the ability to keep the rail engaged with the wave face. 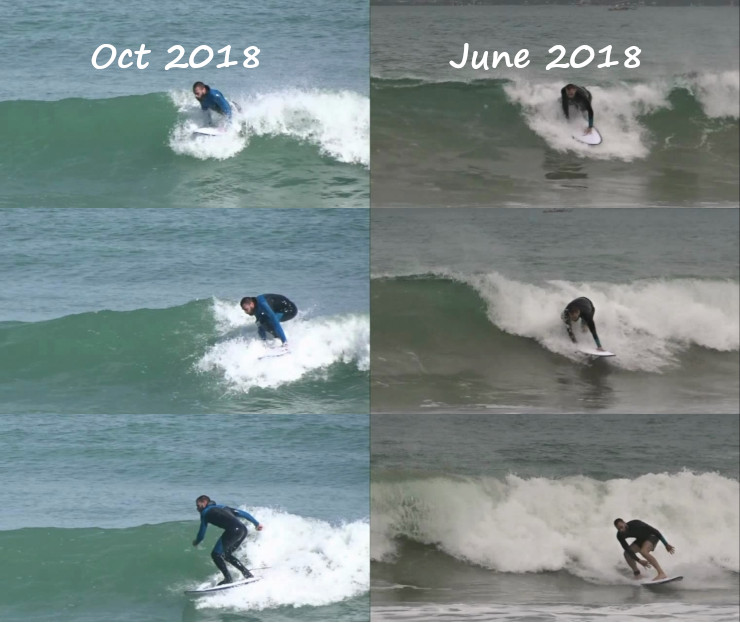 Prior to this he was getting stuck in the whitewater or nosediving on a consistent basis. Now he makes nearly every wave he attempts no matter how steep they are.

So right now we have summer on the way but the dreaded spring winds and covid lock-downs are upon us. Don’t worry, you can still keep your momentum going at home. Learn about forecasting if you need to, then break those popups(or any other skill) in to chunks and with consistency you’ll groove some new muscle memory before Summer arrives! 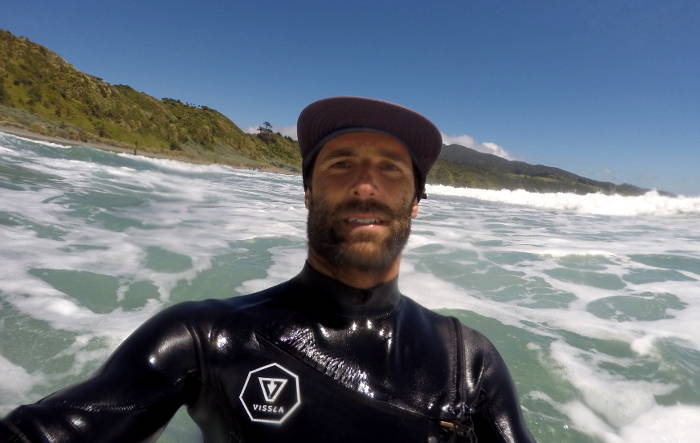